This article originally appeared on TakeLessons.

The voice is a very versatile instrument — and while most young artists aspire for fame on a global level, as a singer you can do many things.

You can become a prima donna in the opera, you can sing at the opening of the World Series, or you can go on a world tour like Beyoncé or Madonna. You can become the voice of a Disney princess, record an audiobook, or provide voiceover talent for radio and television commercials.

If you’re nearing college, you might be wondering: is it worth it to get a music degree? Should I go to a prominent music school to receive a degree in Vocal Performance, or will I be just as successful finding gigs on my own? In this post, I’ll share with you what I’ve learned.

Musician or Hobbyist? Deciding If You Should Get a Music Degree

As you’re trying to decide about a music degree, my advice is this: if you plan to become an artist who can sustain a lifestyle with music, it’s important that you apply yourself to learning as much as possible. This commitment to lifelong learning is what will solidify your status as a musician!

This especially applies to vocalists. Music is a language you learn, just like any other foreign language, and there are many vocalists who “speak” conversational music. They get by and can be quite convincing. They can sing what is sung to them, they can recite what they hear, and they may even have original song ideas. Unfortunately, these song ideas will ultimately become a byproduct of the other musicians they are performing with, because conversational singers cannot clearly articulate what they are trying to convey.

On the other hand, there are fluent vocalists who learn their preferred key signatures to the songs they sing, they lead the band on when to change and what to change into, and they may even be able to transcribe the thoughts in their heads for the musicians they play with, enabling them to rehearse more efficiently.

Getting a music degree exposes you to an array of opportunities, and allows you to educate yourself in all areas of the voice.

There’s a caveat though…

Getting a Music Degree: What You Can Expect to Learn

I went to school to study how to be a singer. I received a BA in Music with a Vocal Performance emphasis. I thought I would be taken more seriously by instrumentalists if I were educated, and if I could tell a guitarist or keyboardist what key I was singing in.

This did prove to be true, but I soon realized that it didn’t matter how much I knew if I did not walk into an audition or performance without confidence and a clear idea of what I wanted. I spent four years learning all the background knowledge, but the truth is, there’s always more to learn as you work toward your music career.

It has been 10 years since I graduated college. At first I was convinced it was a waste of time. It was the first eight years after college that I learned how to book shows for myself, how to market myself as an artist, and how to write the music I really wanted to sing. I diversified my instrument repertoire by learning the ukulele; I continued learning and growing.

What Can You Do with a Music Degree? My Personal Outcome

Having experienced college and the life of a starving artist, I am thankful that I went to school and can rely on music to financially support myself in my ongoing musical endeavors. With grand hopes of becoming a star, I did not foresee becoming a music teacher, a title I now wear proudly.

It can feel like a prison to have to work a “real” job and only get to live your passion on nights and weekends. While obtaining a music degree will not guarantee you the success you may be hoping for currently, in the long-run a degree will allow you to use music in other ways if, by some twist of fate, fame is not in your stars.
— 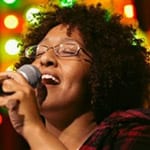 Reina M. has taught singing lessons in San Diego, CA since 2005. She earned her B.A. in music from Seattle University and currently sings jazz, R&B, and soul for her original band The Dynasty. Learn more about Reina here!