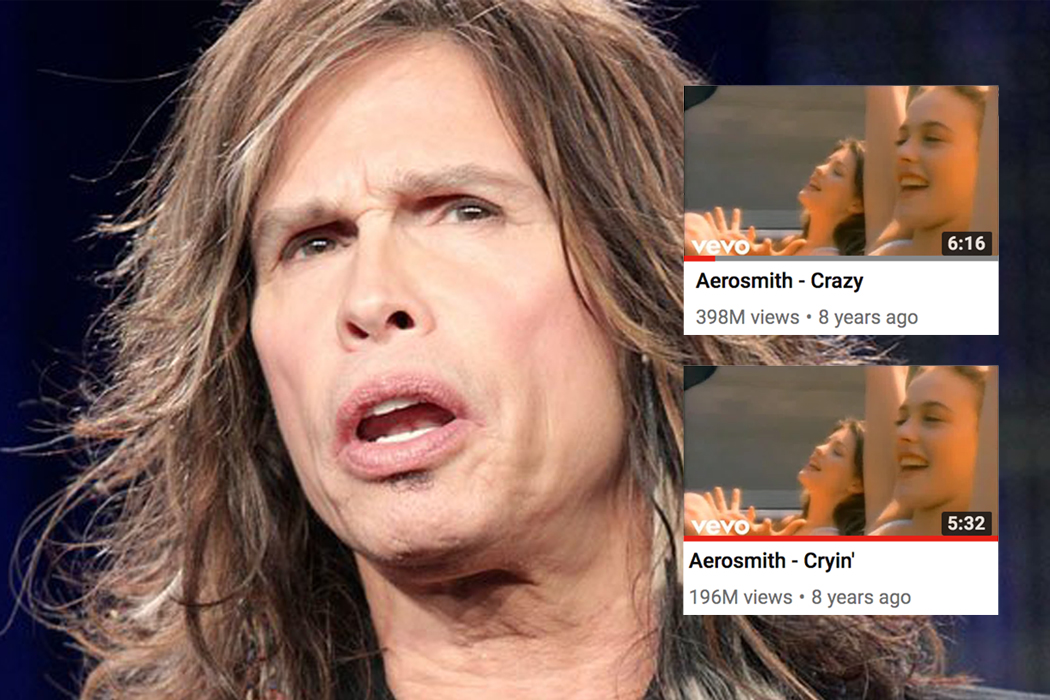 Last summer, I took a road trip to the Grand Canyon with some friends. After some time passing the aux cable from phone to phone, we ended up on Aerosmith’s 1993 7x platinum, 20-million-selling, mega-hit record, Get a Grip. This was one of the albums that seemed to follow us everywhere we went in the mid-’90s. All born at some point in the ’80s, this album had touched each of our musical upbringings in unavoidable ways, leading to a complicated batch of feelings about the record.

The loose consensus in the car was that the best tunes on Get a Grip are “Cryin’” and “Crazy.” After listening, we couldn’t remember which music video was which, because the videos are so similar. In fact, the songs are pretty similar, too. But they’re not just kind of similar, they’re strikingly similar. Did Aerosmith basically write the same song twice?

Of course they didn’t. In fact, both songs have different cowriters. But when put under a microscope, I’d say there’s enough material here to speculate a bit about how these songs came to be. Both songs are mid-tempo blues tunes with lead harmonica, and they obviously share titles that are single, two-syllable words starting with the letter “C.” Both songs’ music videos star Alicia Silverstone, though only one of them has Liv Tyler. We actually had to watch the videos to find that out because whoever runs the Aerosmith YouTube page posted the same thumbnail for both videos!

Which begs the question, does Aerosmith even know the difference between them? Or does Aerosmith just have extreme face blindness for anyone who isn’t Steven Tyler….

Sure enough, the two songs look even more similar on paper. And since today, April 20, 2018, is the 25th anniversary of Get a Grip, let’s go back in time and demystify a little of the songwriting magic behind these two hits, and explore what’s going on here, musically (yes, that is what we do all day here at Soundfly HQ). But first, take a listen to the two hits.

Both songs have ambiguously break-up-themed lyrics that seem related.

In “Cryin’,” the protagonist sings about a break-up that’s in the past, but there’s some doubt about whether it will stick. Tyler sings:

Over in “Crazy,” we find Tyler expressing a similar uncertainty with his relationship:

“Say you’re leavin’ on a seven thirty train
And that you’re headin’ out to Hollywood
Girl, you been givin’ me that line so many times
It kinda gets like feelin’ bad looks good, yeah”

They’re not the same exact sentiment, but they’re certainly related themes and might as well be different parts of the same story. The “girl” drives the protagonist “crazy,” and now he’s “cryin’” and ultimately can’t decide his own feelings.

Both songs are mid-tempo blues songs in 12/8.

“Crazy” might more easily fit into 6/8, but, however you think of it, it’s essentially the same bluesy shuffle feel that brings both songs to life.

Both songs are in the key of A major.

And, thus, both feature a lot of the same chords. The chorus for “Cryin’” is:

The chorus to “Crazy” is:

With the exception of that last little bit of “Crazy,” each song features the chords A major, D major, E major, F# minor, and “Cryin’” gets a C#minor, where “Crazy” gets that added progression at the end. Being in the same key and tonality, the chords in both songs paint a very similar emotional picture; however, since the progressions are in fact distinct, the songs do each have differentiating characteristics.

The melody for both choruses starts with the same intervals.

This one is pretty ridiculous. Sing the opening lyrics to each song: “I was cryin’” and “I go crazy.” Both melodies go up a fifth and then down a whole step. The rhythm is almost the same, too, but Tyler draws out that first syllable of “crazy.”

And the song forms are nearly identical.

Compare that to the form for “Crazy”:

Of course, that’s not saying too much on its own, many songs have an intro and use a verse/pre-chorus/chorus format, but the guitar solo followed by a bridge with an odd number of measures throws up a red flag for me. It’s a classy move, but it’s used the same way in both songs at the same place.

Maybe the big story here is the fact that both songs feature fade outs on the chorus (both of which last for exactly 2 minutes and 15 seconds! What?!). That part actually blows my mind. Plus, who needs to hear the hook for that long?

Have there ever been two hit singles on the same record that bore such similarity to each other?

So many questions, not many answers. But at least both songs still rock!