Most of the time, a song’s title is directly taken from the chorus or the hook. This is one of the clearest ways a songwriter can get their biggest lyric stuck in an audience’s heads. Also semi-often, titles have no connection with the lyrics whatsoever. Sometimes, titles are just a lazy afterthought, as songwriters leave the titling business to the way end of the album production process.

This is all part of the creative process of making music, and titling can go in a thousand different directions. There isn’t anything inherently wrong about any of the aforementioned approaches, but one thing is definitely true: if you want your songs to be impactful and grip your listeners, your songs should be titled with intention.

What does that mean, and why does that actually matter? Let’s discuss!

If you write songs in popular genres, a certain degree of clarity of your song’s meaning matters. That’s not to say you shouldn’t use metaphors or symbolism, but anchoring the ideas in a communicable language is key.

The hook is almost always the song title and it needs to fully encompass your song’s main ideas. Some pop genres will also state that each line of the verse should be able to seamlessly flow into your hook, and therefore, your song’s title.

When people listen to music, especially if they are using it as background to another task, they probably won’t be giving every song their full attention. If your song title is as clear as your hook, they’re more likely to remember it later and search for it by name. Your hook should in most cases, be the thing that is the most memorable part of what your song is all about.

Look at “Good Life” by OneRepublic.

It isn’t the most original title, but it also isn’t as boring or common as a title like “Stay” or “For You.” When we read “Good Life,” it is immediately clear what the song is about and what kind of context we would likely listen to it.

A more original title, which is equally as effective in clarity, is “when was it over?” by Sasha Alex Sloan (feat. Sam Hunt), which immediately reads as a heartfelt ballad.

+ Read more on Flypaper: “How The Weeknd’s “Blinding Lights” Takes Beethoven’s Ideas to #1.”

There are so many songs being released every day, that your song title will unfortunately be the de facto advertising headline for your project. It will be the first thing people see when they come across your social media pages, posts, or ads. Not everyone is going to want to listen to your song, but you definitely want to pique your demographic’s curiosity and click.

Maybe try extending the title to expand on the topic, like Rhys Lewis does on his album, Things I Chose to Remember. Even the album title is relatable and gives us an immediate idea of what these songs will be about. In a similar way, a song like “I’m Not Pretty” by JESSIA is relatable just by the title.

Alternatively, try writing a ridiculous title, like Clinton Kane does with his song, “CHICKEN TENDIES.” The song is not about chicken tendies at all, or if it is it’s strictly and creatively metaphorical, but the title certainly is attention-grabbing!

Talking about song titles that never actually appear in the song itself, that’s a great way to set expectations only to break them. And hey, we did an entire article about that!

People say that originality is dead, and sometimes it feels like it’s with good reason. It seems like everything has been said and done already; so while self-expression is important, there is something to be said about the effectiveness of twisting well-worn clichés to surprise your listeners.

Your song title sets up an expectation about how the song will progress (whether you like it or not, by the way). You don’t want to completely trick your listener — song clarity still matters — but yeah, go for flexibility and push the envelope a little. For example, your gym buddy will totally want to hear a song called “Work It Out,” and it’s okay if they only realize halfway through, that it’s actually a ballad about a breakup. Go ahead, surprise them.

I love the song, “Happier” by Ed Sheeran, because it literally has the word “happy” in the title, even though thematically, it is quite the opposite. By the slight shift in the word’s internal gravity, we listeners can find the title ambiguous enough to accept this isn’t a song to play at a party, but we wouldn’t have expected the song to be this sad either.

You can also surprise your listener by setting up the song that makes them think they know exactly what it’s about. Make the theme of your song about a breakup where you’re talking about the flaws of the relationship in the verse, only to turn it around and blame yourself in the chorus. Make your listener think, “Oh, I haven’t heard this song title in this context and that’s actually quite clever and original.”

Maisie Peters likes to do this, particularly in her song “Worst of You.” It’s a great title for a song and implies from the beginning that the song is about a poor love interest — only to have her turn it around in the chorus and reveal that she’s still devoted to them.

+ Read more on Flypaper: “3 Ways to Grip Your Listeners With Opening Lines.” 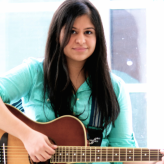 Ramita Arora graduated from Berklee College of Music and has been writing, producing and releasing music since. In 2019, she received Top Honours in the Indie International Songwriting Competition in the Folk/Acoustic category for her song “Roses.” She loves to teach music and started Write The Next Song, a songwriting blog to inspire and motivate songwriters.