Discover
3 weeks ago by Soundfly Partners
0

Cryptocurrency is the new alchemy. You can’t hold Ethereum or bite into a Bitcoin. Modern miners create virtual gold out of nothing. While the alchemists of yore suffered many misadventures, from lead poisoning to lost eyes, their noxious art was much less environmentally damaging than the emissions of the blockchain.

Many great minds, among them Leibniz and Newton (who spent more time on his alchemical investigations than on gravitation and optics) have ardently believed in the possibility of transforming base metals into precious ones — getting something from something else, rather than (as with those the blockchain gang) something from nothing.

Johann Sebastian Bach was also a likely believer in alchemy, and its precepts inform some of his most complex and inscrutable compositions, the gold standard of complex counterpoint. 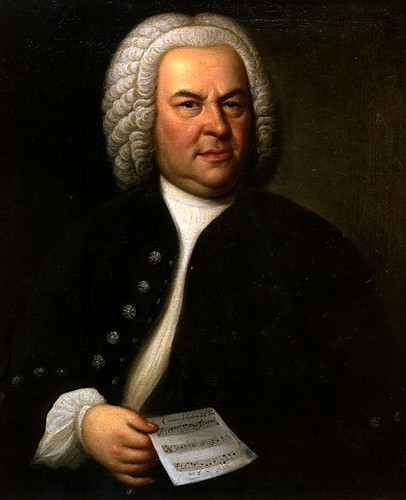 In January of 1738, Bach’s kinsmen and sometime colleague in the city of Weimar, Johann Gottfried Walther, sent a letter to his longtime correspondent Heinrich Bokemeyer, the Director of Music in the north German city of Wolfenbüttel. Along with the letter came a precious piece of paper — a written-out resolution of one to Bach’s canons in the composer’s own hand. Although this autograph page is now lost, it is likely that the piece in question was the so-called Hudemann canon, BWV 1074, named for its dedicatee, a jurist and learned amateur in music.

A decade earlier the Hudemann canon had first appeared in print in Der Getreue Music-Meister (“The Trusty Music Master”), a bi-weekly music serial emanating from Hamburg in 1728 and edited by Bach’s friend, Georg Philipp Telemann. The version of Bach’s canon published in Der Getreue Music-Meister was presented in enigmatic notation, the only clue to its proper resolution lying in the jumble of clefs arrayed on either end of the staff. The contemporary theorist and Germany’s “first music journalist,” Johann Mattheson, also saw a copy of the canon around that time, even noting for his readers the exact day that the canon had arrived — August 18, 1727 — during one of his lectures delivered for the students of his collegio melopoetica; Mattheson immediately instructed his charges to set about trying to solve the puzzle, and after a while two of the pupils lighted on the same solution. This is presumably the resolution that Mattheson published a dozen years later in his magisterial treatise, The Complete Capellmeister.

Given the popularity of The Trusty Music Master and The Complete Capellmeister among music professionals and enthusiasts, it is probably fair to say that Hudemann canon was Bach’s most famous piece in the first half of the eighteenth century. As it appeared in these widely circulating publications, the canon’s ten, sphinx-like notes were a public display of Bach’s command of pure counterpoint, an art admired by some, respected by many, and scorned by more than a few who favored the seductions of opera over the mental exertions of musical complexity.

Flaunting its erudition through the use of cryptic notation, Bach presented the canon as a mystery to be unveiled: the version for public consumption was a purposefully obscure representation of the mournful majesty to be heard in the sounding piece locked within.

Aside from exchanging such gems of strict counterpoint, the correspondence between Johann Gottfried Walther and Heinrich Bokemeyer also includes a brisk traffic in another complicated art: alchemy.

For example, in the summer of 1730, near the beginning of their correspondence, Bokemeyer had received a letter from Walther relating a seemingly unusual encounter.

On Wednesday the 19th of July, Walther had made one of his customary visits to the Ducal Library in Weimar, where Bach had lived until 1717. Walther found the library closed, but the elderly curator of the adjacent ducal Kunst-Kammer saw Walther waiting outside and invited him in to look at the collection’s numerous scientific instruments. But on entering the museum, the curator launched into a lengthy monologue on his alchemical pursuits, going on to describe an elaborate machine he had seen some thirty years earlier that had been constructed using twenty-four glasses which ground metal to a fine grey powder — an alchemical process called calcination.

According to the curator, this powder had unfortunately consisted only of “mere mercury,” that is, it did not contain any of the rare, philosophical (i.e. alchemically active) mercury that could produce a true philosophical fire, and as a result the process had not yielded any gold.

+ Read more on Flypaper: “Bach’s Worldview Was Way Different from Ours – On “Musical Theology”.”

The ducal librarian had in the meantime arrived, and Walther excused himself to make his visit to the library, but this chance meeting with the curator and the discovery that he was also an alchemist left a lasting impression on Walther. Two weeks later, Walther wrote to Bokemeyer to ask him about the viability of constructing a grinding machine such as that described by the Weimar Kunst-Kämmerer.

Could such a contraption be constructed so as to produce a purified substance that could then be transformed into gold?

To be sure, there were enlightened critics of the alchemical arts, Mattheson among them. An avowed enemy of the musical magic that had been widely cultivated in previous centuries and continued to have many practitioners in Bach’s time, Mattheson mockingly describes how he lent his copy of a famous music treatise to an old man, who on returning the volume recounted how a ghost had leapt from its pages.

In 1722, the scientific periodical Parnassus Boicus began publication in Munich. In its empirical approach the journal is an important early document of scientific methods in Germany, and offered the first major critique of alchemy. Yet in 1723, the year that Bach took up his post in Leipzig, Joachim Boeldicke published a spirited defense of alchemy in the same city.

Bach must have known at least something of the practice of alchemy, though one can hardly imagine him having had much time for practical application of its precepts. But given his documented interest in coins, precious metals, weights and measures, it would be surprising if he had not known and appreciated something of the alchemical arts. He could well have encountered the Kunstkämmerer during his decade-long tenure in Weimar among many other alchemists active in the towns where Bach spent his career.

Music treatises of the period — and Bokemeyer owned the most comprehensive collection of such works — often described canon and its companion, double counterpoint, using alchemical concepts and language. Large sections of these works read like glosses on paradigmatic passages from widely disseminated alchemical treatises.

One of the most-prized books of complex counterpoint and canon produced before Bach was the Musicalisches Kunstbuch by the honored north German musician, Johann Theile. Walther owned a copy, and Bach doubtless saw it, and perhaps even made a copy.  Although it has been compared to Bach’s Musical Offering and The Art of Fugue, Theile’s Musicalisches Kunstbuch is not a unified set of pieces, but rather consists of miscellaneous compositions probably dating from the 1670s and ’80s.

With its very title, Theile explicitly linked the collection to alchemy. Early eighteenth-century dictionaries define a Kunstbuch as a book of hermetic knowledge or magic. So too, Theile’s title-page introduces a book of precious and powerful formulas: “Musical Magic Book, in which 15 complex pieces and secrets, which spring from double counterpoint, are to be met.”

In the book, the contrapuntal alchemist learns of the secrets that can be used to contrive strange and wonderful artifacts.

On opening the Musicalisches Kunstbuch, the contrapuntal artificer entered a secret, magical world. The pieces inside are generally short, but the notes combine in myriad ways that produce vast quantities of rich musical material. Like alchemy, complex counterpoint had transformative powers.

Two of the five surviving copies of the Musicalisches Kunstbuch, both of which date from the middle part of the eighteenth century, open with Theile’s ten-part canon entitled the Harmonischer Baum (“The Harmonic Tree”), a piece which suggests further links with alchemy. The canon is presented in the form of a tree with ten branches; the music on the trunk and “roots” make up a separate canon. Theile’s tree is similar to representations of the arbor philosophica, the symbol of Hermetic philosophy.

It is hard to imagine that musician alchemists such as Bokemeyer and Walther would not have seen the Harmonischer Baum as a musical and graphic allegory of alchemy, especially when such a symbolic canon opened a collection provided with the title, Musical Magic Book. Bach would likely have understood the title in this way when he opened the manuscript in Weimar, discovering for the first time many of the peculiar contrapuntal spells contained within.

A year after Walther sent him the Hudemann canon’s solution, Bokemeyer was to be honored for his musical erudition and contrapuntal knowledge, becoming the fourth member of the Corresponding Society of the Musical Sciences. Eight years later the group would admit Bach. For his election into the society Bach submitted the Canonic Variations on Vom Himmel hoch komm ich daher (BWV 769), and distributed to the other members an off-print of the six-part canon he is seen holding in the famous 1746 portrait by Elias Gottlob Haußmann.

Both masterpieces of contrapuntal artifice derive ultimately from basic building blocks of music: the first from a familiar chorale melody, the second from a prosaic eight note bass-line.

Progressing from simple combination to tremendous intricacy, Bach canons demonstrate the underlying interrelatedness of contrapuntal elaborations, and the fundamental role of the artifex in leading nature — the raw material that is the eight-note bass line of the canon — towards perfection.

+ Read more on Flypaper: “Remember the Rounds We Sang as Kids? They’re Actually ‘Canons,’ and Canons are Awesome.”

As the Hudemann canon also illustrated with such sublime reticence, the seemingly simple, but in fact highly skilled act of arranging the building blocks of music in the proper proportion and configuration could result in a kind of magical expansion of the natural material. By activating musical substances the artifex could bring canon to life.

Just as magically, the simple D-minor subject of The Art of Fugue could yield innumerable fugues and canons in a multitude of genres, while mingle with numerous countersubjects.

Other materials drawn from nature, like the opening the first eight notes of the bass line to the Goldberg Variations as in the canon held by Bach in his portrait, could proliferate endlessly if mingled in perfect proportions meticulously heated in the alembic of the composer’s genius.

For the alchemist/contrapuntists of Bach’s generation, these miraculous combinations could prove that the inanimate was alive, that there was a transformative energy in all musical matter if one was clever and committed enough to find and unleash it.

Slight of carbon footprint and enduring in value, Bachcoin is not to be hoarded, spent and speculated on, but to be played with, listened to and marveled at.

For more on Bach’s contrapuntal fabrication, open the pages of my book, Bach and the Meanings of Counterpoint.