What the Heck Is a Bouzouki? 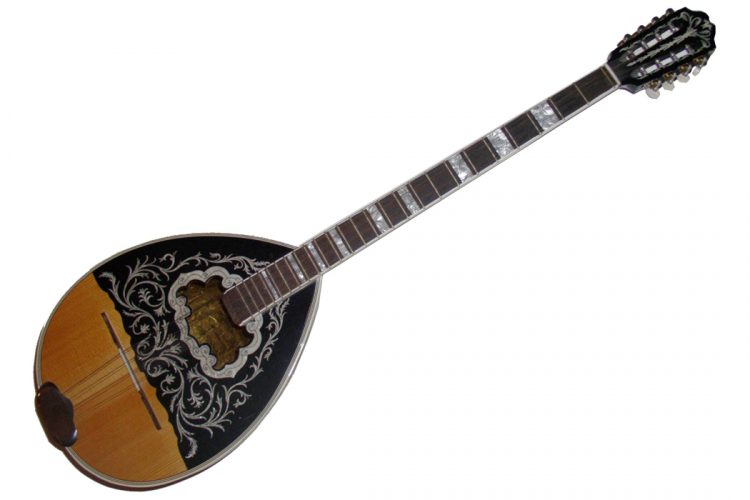 A few years ago when I was on tour more often, I used to stay at a friend’s place in Boston every time we rolled through. Across the street there lived a friendly, half-senile old Greek gentleman. He’d be so excited when we arrive — running out of his house offering shots of ouzo and waving his bouzouki in the air, trying to get us to play it so he could then make fun of us for how bad we were at it. I’m a guitarist, but this thing is more like an oud combined with a mandolin with the neck of a banjo — not easy! So what the heck is a bouzouki anyway?

The bouzouki (in Greek: Μπουζούκι) is a Greek string instrument with either three or four courses (sets of two strings, like on a 12-string guitar). It is used commonly in modern Greek music, as well as in performance of the traditional repertoires of the rebetiko folk tradition. The bouzouki is often ornately and beautifully decorated like many instruments that have evolved from Ottoman and Balkan traditions, and is played with a plectrum, or pick.

There is also an Irish-style bouzouki, which has been adapted to perform Irish music in a different tuning. The most common tuning is G D A D and D G A E (which is used to play tunes written for the mandolin), whereas the most common tuning for a Greek bouzouki is C F A D.

Curious what the heck a theremin, guzheng, djembe, or glockenspiel are? Check out the full “What the Heck Is a…” series here!

Let’s listen to the difference between the two. First, here is the virtuosic melodic style of the Greek bouzouki in performance:

And here’s a typical-sounding Irish jig:

History of the Bouzouki

Although the bouzouki takes its direct origins from instruments brought from Turkey and the Balkans, (mandolins, citterns, and the like), the influences behind it go all the way back to Ancient Greece. The bouzouki was inspired by the pandura, a long-necked lute dating back to at least 1,000 B.C. The name bouzouki comes from the Turkish word “buzuk” meaning “broken” or “modified.”

As a result of the Greco-Turkish War (1919-1922), approximately 900,000 Greeks of Anatolian and Muslim descent had to leave Turkey and move back to their Greek “homeland” in a population exchange between countries. This brought instruments that had been developing in Asia Minor and the Ottoman Empire for hundreds of years back into an established and quickly modernizing Greek musical tradition. From here the modern bouzouki was born and quickly ushered into supporting rebetiko music, or urban Greek folk music.

Surprisingly (and at the same time not surprisingly), the bouzouki was first recorded not in Greece, but in America in 1926. Konstandinos Kokotis recorded a duet with an accordion and played bouzouki in a modest, chordal style. It was not until 1932 that the bouzouki was first recorded (in New York) in its true melodic style, soloing some widely popular folk melodies. Listen to “Dive’s Rast” here by Ioannis Halikias.

Rebetiko music is very much worth delving into. It is a beautiful style of music that tells incredible stories and can open one’s eyes to using melody and rhythm in myriad interesting ways.

The blog Mediterranean Palimpsest highlights the two most common rhythmic structures of rebetiko — the compound zeïbekiko in 9/8 time and the hasapik/hasaposerviko in 2/4 time. Here are the ways that a zeïbekiko rhythm can be divided: Here’s a great reference track to hear the old style zeïbekiko rhythm in 9/8:

Like other folk forms including fado (from Portugal), tango (Argentina), and the blues (southern USA), rebetiko draws lyrically from the hardships of Greek daily life. Its songs are often concerned with topics of crime, poverty, drinking, prostitution, and violence, as well as themes of war, love, exile, and work.

Here’s an example. The first lyrics in the below song translate to, “I’ve learnt that you are a crapshooter, that you are drug addict/you are mangas, brave, a nightwalker.” The title means “Young Hashish Addict.”

While there’s a ton of stuff we can talk about in terms of rebetiko, one of the things I find most fascinating is that it often incorporates a taxim. Borrowed from Arabic music, a taxim is an improvised introduction to a song that sets the key and the tone for what is to come. But it is performed without measured notation, requiring the musician’s interpretation.

+ Learn more on Soundfly: Some of the most evocative music is woven by the fabric of a society’s daily hardships and testaments of hope. Explore how gang violence in New York fueled the music of Bernstein and Sondheim in “The Somewhere Project: A West Side Story Companion.”

How to Play the Bouzouki

First, you’re going to want to tune your instrument. While there are tons of alternative tunings and the bouzouki is an extremely versatile instrument, we’ll stick to the common C F A D. For the record, the following instructions focus on the Greek style of playing, but the Irish style of bouzouki playing is also wonderful and worth checking out! Here’s a handy tuning video you can use (it goes up from the highest string first):

Now here are some techniques for introductory playing by the YouTube user, Slimwillywilliams.

One of the most internationally memorable bouzouki songs ever is Mikis Theadorakis’ “Zorba’s Dance” (from Zorba the Greek).

Giorgos Zambetas is one of the most famous Greek entertainers. He’s a wicked bouzouki player and singer as well. Watch him do his thing in this film:

This album collects a number of classic bouzouki songs from the best-known players in Greece, including Bebis Stergiou, Yannis Papaioannou, and Kostas Kaplanis.

Fun Things on the Internet

There is a bouzouki player sitting in the corner of the cheese shop for no apparent reason in the famous “Cheese Shop” Sketch in Monty Python’s Flying Circus:

Master of Puppets (by Metallica) on bouzouki:

Greek wedding music heavily involves the use of the bouzouki. It’s a hoot, and accompanies much food, drinking, and a number of bizarre traditions.

This short documentary recounts the story of a serendipitous encounter between two Greeks in Amsterdam who happened to open food canteens next to each other, thus uniting a local Greek community around gyros and bougatsa pastries, coffee frappés… and the old country dance music of the bouzouki.

Love learning about obscure instruments? Check out the full “What the Heck Is a…” series here!