Hidden In Plain Sight: The Greatest Musical Easter Egg Ever I just tripped over a music theory Easter egg that’s been hiding in plain sight for 50 years. It’s easy to understand with a little explanation, and it just had to be intentional.

Recently, I wrote about Mozart’s use of non-harmonic tones — pitches that don’t belong to the chord of the moment:

“They usually fit one of 12 rules (patterns with the notes around them), which is how your ear makes sense of the pitch despite it being a chordal immigrant.”

One of the simplest non-harmonic patterns is the “neighbor tone.” Start on a note that’s in the chord, go up or down a step, then back to the first. That’s a neighbor tone. The syllable “birth” in the musical crime against humanity called “Happy Birthday” is an upper neighbor.

Go down instead of up and you have a lower neighbor, à la the “Jurassic Park Theme” at 0:07:

Here’s the Jurassic melody with the neighbors marked:

And when Whitney Houston sang “And ahhhhh-eee-yaaaii will always love yooou,” the “eee” was an upper neighbor.

You get the idea.

I wanted one more neighbor tone for this post, so I started singing the lower neighbor pattern to myself, like the three Jurassic notes, to see if anything popped into my head. “Dah-dah-dah,” I sang.

And also: OF COURSE.

The theme to Mr. Rogers’ Neighborhood… is absolutely brimming with neighbor tones!!

You think this is a coincidence, I can tell. Let’s just see about that.

Fred Rogers wrote the words and lyrics himself in 1967. He changed it a bit for the show — more on that below — but fortunately his original arrangement is still in publication, so we can see his intent. I’ve transposed the first four bars to the key he sang in the show: 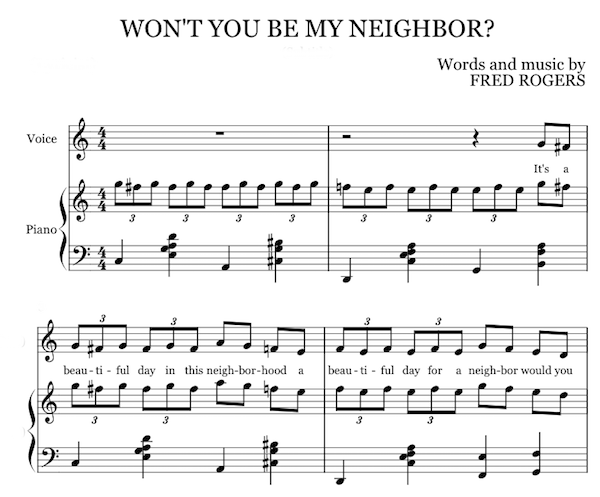 It’s not surprising that he wrote his own theme song — Rogers’ 1951 bachelor’s degree was in music composition. And when somebody with a degree in music composition writes a song with the word “neighbor” in it 6,000 times and includes neighbor tones in the melody, that’s no coincidence. It’s easy to imagine his quiet satisfaction at a geeky inside joke that virtually no one would ever get.

Hm. You’re still unconvinced. So this fairly common non-harmonic note pops up a couple of times in the song, you say, big deal. That doesn’t mean it was intentional.

Here are those four bars again with the neighbor tones marked: 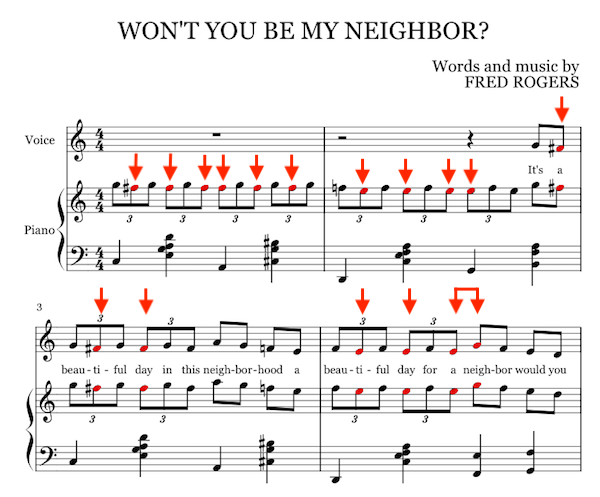 Seventeen neighbors in four bars, including a double neighbor on the word “neighbor?”

This is too densely-populated a neighborhood to be a coincidence. This is a music major having fun.

Interestingly, by the time the show premiered in 1968, he ironed most of the neighbors out of the vocal line, substituting a straight line of Gs. Maybe he felt the waggling back and forth got in the way of understanding the words, or that it would be too hard for the kids to sing along at home, especially the way it throws off the accent in the triplets. I can easily see him sacrificing his little inside joke so we could feel more comfortable.

Keep learning about theory and harmony, composing and arranging, songwriting, and more, with Soundfly’s in-depth online courses. Subscribe for access to all, like The Creative Power of Advanced Harmony, Orchestration for Strings, and our course with Grammy-winning pianist/producer, Kiefer: Keys, Chords, & Beats.