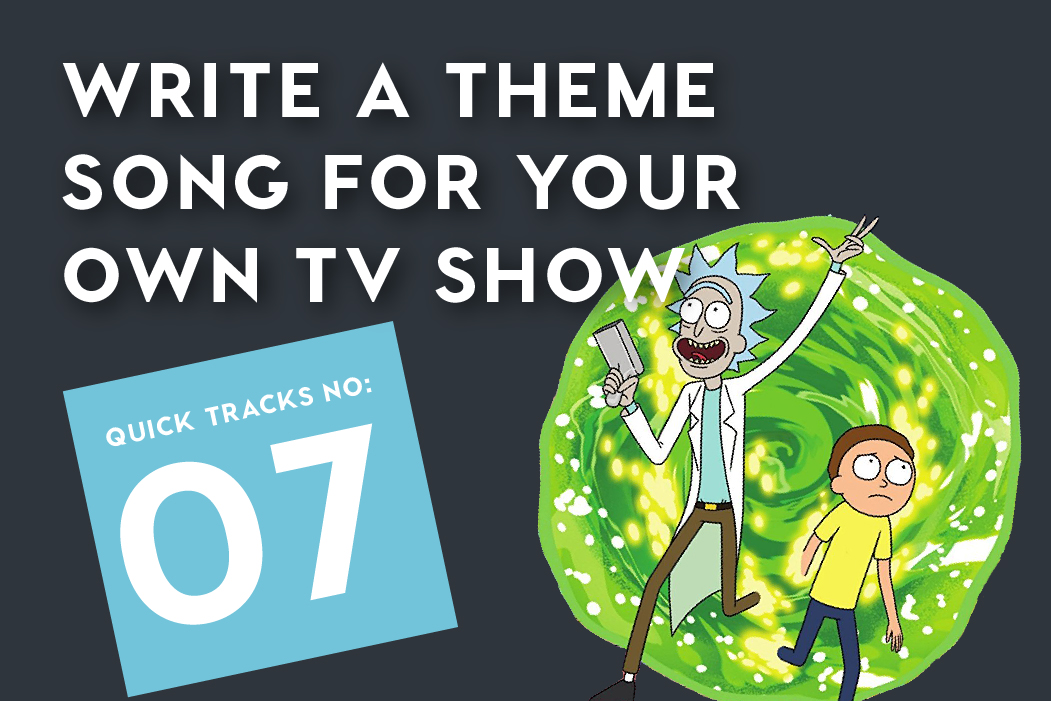 We’re excited to help you get your 2018 off to the best start possible. And that means setting personal development goals and challenging yourself to meet them. That’s what Quick Tracks is all about, and we’re here to help you work toward becoming the kind of musician that you’ve always envisioned.

When writing a sync piece for picture, whether that’s for TV or film, or a 30-second ad spot, it’s important to get to the heart of the mood or emotion of the music right away. The music sets the tone. And this is nowhere more apparent than in a theme song, where the music is also responsible for establishing the foundational message of the program.

We’re currently living in what has been described as the second true Golden Age of TV, and that means we’re living in the Golden Age of TV jingles. From modern classic TV themes like BoJack Horseman, Mad Men, and Narcos, to deep cuts like the groovy synth slap-bass and mouth sounds of Seinfeld, and the angelic opening of The Simpsons, TV themes have a powerful role in the viewing experience.

For this week’s challenge, we want you to write the theme song to your own TV show! Now that doesn’t mean go out and create an entire TV series, but try to think of your life as a show… Who might the characters be? What’s the genre; is it a comedy, a drama, a thriller (we hope not!)? Is the tone of the show somber, is it exciting, is it a soap opera with no end in sight?

The theme song, in essence, is simply a catchy jingle meant to get you humming along right after the first listen — but it’s also supposed to take all of that above stuff into account, so that when the viewer finds themselves on the subway humming your little melody, it brings to mind the entire picture. Try writing a few of these, once you’ve stumbled upon a melody or a motif you can’t get out of your head, you’re onto something! (And don’t hesitate to share with us all the quirky details of your show!)

Need some help getting started? Scroll down for more.

The power of simplicity and hum-ability

While some shows definitely use their opening sequence to flaunt their expanded budget, with over-orchestrated jingles and complex montages, most TV themes are actually quite simple and replicable in a modest home studio. The goal is to extract the most amount of character using the fewest amount of notes.

Throughout the episodic life of a television show, the main theme (or motif) may be recycled to create various vignettes in different musical styles; like canon-style, or in an arpeggiated form, or played on different instruments entirely. This is possible when the theme song is simple enough to be flexible. You can even switch the tonality of the theme from major to minor, or vice versa, for some really wacky results!

Some of the most masterful applications of this method were produced for the food science show, Good Eats, and the sitcom, Taxi. In Good Eats, for example, the simple theme groove gets adapted over and over again in slower versions, shortened versions, and rearranged with new instruments, throughout each episode. In Taxi, Bob James’ bluesy tune, “Angela” makes up the theme music, and elements of it can be heard throughout every variation he wrote for the television series.

You also want to maximize that good old fashioned hum-ability. I still find myself humming the themes to shows I watched when I was a kid like, Knight Rider, Family Matters, and Rugrats, even if I can’t immediately place what it is I’m singing!

Here’s one I really like written by Stephen Malkmus (Pavement, The Jicks) for the show, Flaked. The theme only features one line of lyric (words sometimes complicate the message), some happy sounding guitar chords (to convey that sunny California coastline where the show is set), and a nice ritardando at the end, which is a fancy term that basically just means “gradual slowing down.”

This technique works as it helps to create a more organic fade between the introductory credits of the show and the episode itself.

Another theme song that I think does a great job of conveying the perfect message, setting the viewer up for what’s to come, is the Rick and Morty opening credits music. It’s an epic synthesizer voyage that weaves in elements of sound design to create sentiments of “space,” “adventure,” and “mystery,” and I guess in a tongue-in-cheek way, takes itself a bit too seriously.

Finally, I am always inspired by the theme song that plays over the opening credits to Mad Men. The ideas behind imagery and the music are perfectly synced — as soon as we hear the descending string theme, the surroundings start to crumble, and we’re taken on a journey down. The mysterious theme is repeated and emotes the drama of the characters. The cool groove matches the glossy, infallible facade.

What are your favorites?