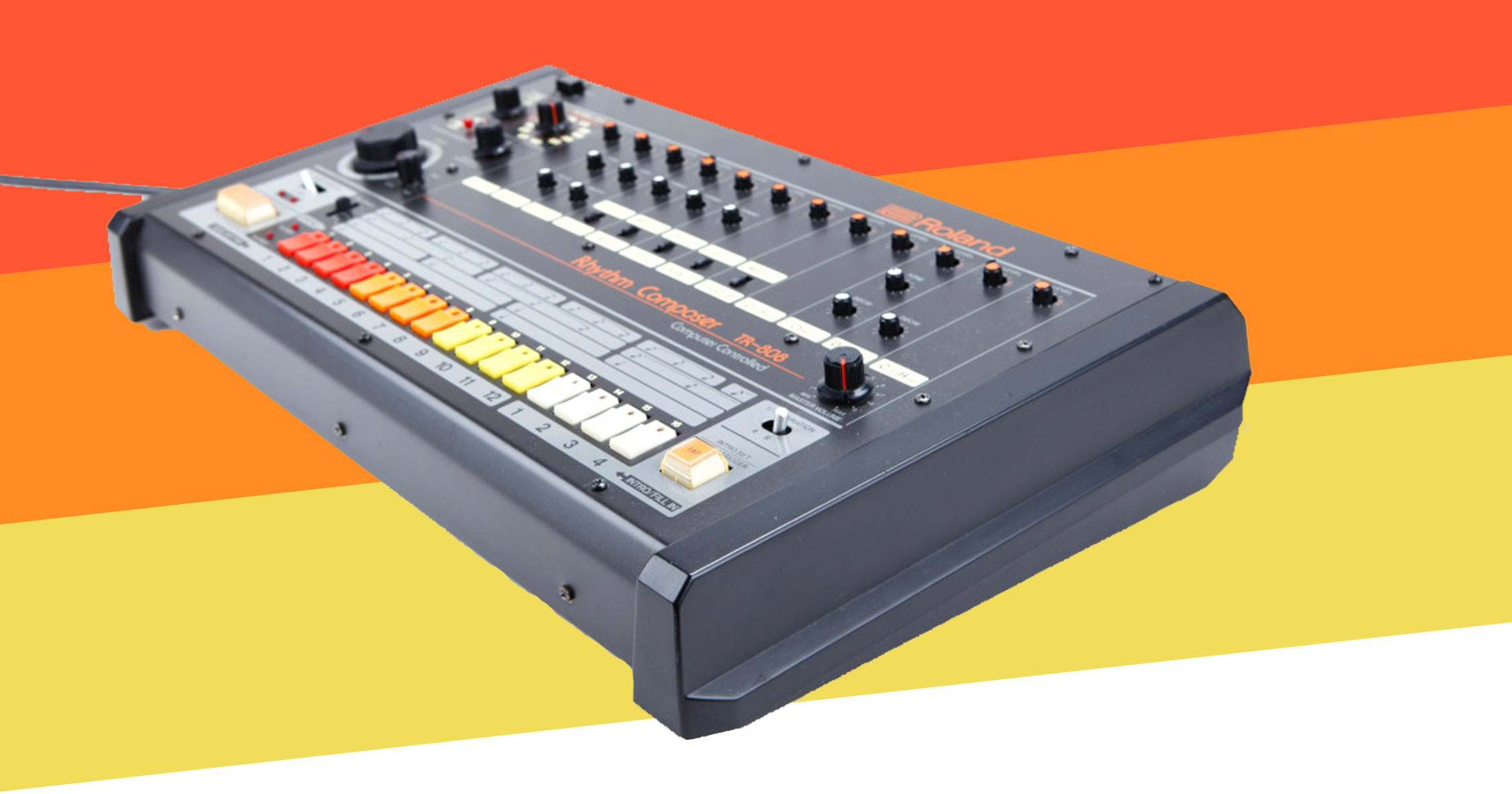 Ah, that classic beat, marching ever onward, familiar as the beat of our own hearts. But the beats we’re so consumed with, the sounds that so commonly drive our daily lives, are not only not the sound of a beating heart (a robot heart, maybe), they’re not organic sounds at all.

Yes, yes, whether you like it or not, the music we consume is predominantly set in time by that which we call the drum machine.

And while there are an infinite number of analog and digital drum machines on the market, most tend towards the ephemeral, finding favor among a few artists for a few years, before the sound becomes dated and the artists move on. But owing to some mystical fake-drum alchemy, for nearly 40 years, the Roland series of 606s through 909s have managed to find relevance again and again. What are the odds that a drum sound as stereotypically ’80s as the one found in Phil Collins’ “Take Me Home” or Whitney Houston’s “I Wanna Dance with Somebody” would title a Kanye West album or provide the main instrumentation in Fetty Wap’s “Trap Queen”?

Humans first utilized mechanical technology to create rhythm machines back in 1932. Henry Cowell asked Leon Theremin (yes, the inventor of the famed electronic instrument bearing his name) to help him create a machine capable of producing a host of rhythms, up to sixteenth notes, by a mechanical turning-wheel-and-key system known as the Rhythmicon.

This device starts with a fundamental rhythm and then, based off of ratios inherent to the overtone series (e.g., 1:2, 1:3, 1:4, etc.), produces rhythms twice as fast as the fundamental, and three times as fast, and four times, and so on, up to a multiple of sixteen.

Here’s one full cycle of what it might sound like if all of those rhythms were played at once (according to their position in the overtone series, starting on C1 at 15bpm — where my nerds at??). In other words, it’s what would happen if you held all the keys on the Rhythmicon down at once.

The potential for creating highly complex polyrhythms was staggering. All this power, in 1932!!!

These days, our understanding of “mechanical” drum machines has more to do with a 4×4 grid and whatever’s loaded up into it, or a drum sequencer playing back preloaded samples in a prearranged pattern. Of these, perhaps the most iconic and widely recognized drum machine series (and one experiencing a particular renaissance in electronic music today) is Roland’s classic rhythm composers from the ‘80s: the TR-606, TR-707, TR-808, and TR-909.

Let’s take a closer look at these four distinct rhythm boxes and see (and hear) what has made each of them stand the test of time.

+ Read more on Flypaper: “What Is a Music Engraver (and What Does It Take to Become One?)” From soul to hip-hop, indie electronica to synthesized East Indian ragas (below), the 808 has had boundless influence on the music of the last 30 years. Its analog voice circuits create a warmth and openness that many producers still find very desirable. Some undeniable magic about this humble sixteen-step sequencer induced a musical revolution and continues to enthrall us. Its relatively low cost compared to contemporary devices helped fuel the 808’s popularity, particularly in the burgeoning hip-hop scene. It’s now a mainstay in sub-genres like Dirty South and trap.

The 808 is renowned for its incredibly sub-heavy kick drum sound and a funky but wholly unrealistic set of percussive elements like the metallic clap, synthy cowbell, and hyper-pitched toms. Like many beloved vintage analog-circuit devices, the 808 contains many quirks and irregularities in its tuning and delivery, and a natural sort of compression on its output. This makes its distinctive sound difficult both to replicate with digital synthesis or to convincingly sample and run its sounds individually — it just doesn’t breathe life into tracks in the same way.

The 808 interface has a basic pattern writing selector and instrument selector interface in the top left, a tempo knob, various volume/tone/articulation rotaries across, and the sixteen-step sequencer holding down the bottom of the interface, with each step representing a sixteenth note of one bar. While digital methods have largely overtaken the production workflow of contemporary artists, these sort of tactile interfaces give working with these machines a unique pleasure.

So much so, in fact, that in 2014 Roland released an update of the TR-808 called the TR-8 Rhythm Composer, which also includes samples of the TR-909. And at a retail price of only $500, it’s difficult to justify spending several thousands of dollar to purchase and repair a vintage unit.

And never underestimate the internet! An app company called DreamPipe created an HTML5 emulator of the classic 808 for you to play around with all you want! Still, some will tell you that there’s nothing quite like the original.

Check out some classic tracks made with the 808:

If you find yourself with an hour to spare, this is a great fictional film dedicated the 808’s uncanny abiity to generate hits.

And finally, if you’re thinking about getting an 808 yourself, maybe sleep on it, first… The TR-808 was a commercial flop at the time of its release in 1980, pushing only 12,000 units and taken out of production by 1984. But the rise of hip-hop and other electronic leanings lead to the development of the follow-up machine: the TR-909.

+ Learn more: Ever wanted to learn what all those mysterious buttons and knobs do on your synthesizer? Check out our free course series Demystifying Synths today! Roland’s strategy with the 909 was to capitalize on the success of other digital-sample-based drum machines by introducing a hybrid of the 808’s analog circuitry and more realistic digital sampling methods (or at least as “realistic” as drums sounded in the 1980s). They didn’t get very far in the realism battle against the more expensive Linn and Oberheim machines, but they did end up birthing another massive cult hit in the long run.

While both machines were capable of holding multiple patterns and even songs with many sections, the TR-909 was the first drum machine to feature MIDI capabilities, so that it could trigger other instruments and be triggered by other MIDI controllers, in turn. The 909 has some fun controls built with analog circuitry for seamless real-time modification of parameters such as the pitch, attack, and decay, which are great for jamming out and creating weird and wacky moments in a composition.

The “accent” feature also gave a primitive and limited control over velocity and dynamics, made to emulate the more human performance of a live drummer.

Though intended as a studio tool primarily for demos and amateur production for “complex, sophisticated drumming” (as the above ad claims), several notable ’90s techno and dance music pioneers took the 909 and ran with it. To my ears, this is the sound both of early underground raves (despite me not being old enough to have experienced one firsthand) and cheesy ’90s pop jams, but it’s also served some serious pop heavyweights as well. Samples of the 909 are still readily circulated in many forms of electronic music.

Check out some classic tracks made with the 909: Ah, the red-headed stepchild, the TR-707. Truly, this is simply the poor man’s 909, complete with the dry, plasticky, wooden timbre of its 15 digital samples. Released in the same year as the 909, the 707 was and is mostly noted for its MIDI and DIN synchronization functions, and for the convenient trigger out from the rimshot channel. Still, the 707 ended up on its fair share of well-known records, from electronic artists such as Aphex Twin and Squarepusher to pop acts Phil Collins and George Michael.

It largely exists today as another coveted sample pack — so much so that Roland re-released the samples as an official expansion pack for their new TR-8 we mentioned earlier.

Check out some classic tracks made with the 707: Yes, that’s right, it was the budding digital age, and technology was all the rage. That certainly extended to music, and found a home in this “computer controlled” rhythm box designed to pair with the legendary Roland bass synth, the TB-303, for guitarists to use as practice tools. These days, with eBay price tags in the hundreds and thousands, respectively, it’d be cheaper to hire your local events band than it would to procure this digital rhythm section.

These boxes, hyped as the latest in the TR series, enjoyed a short period of interest around their release in 1981. But quickly, sample-based drum machines and more realistic samplers beat out the robotic sound of the 606/303 combo.

Where the 606 truly flourished was in the crossover between electronic music and rock, especially in the ’90s and beyond. Groups like Nine Inch Nails, Blur, Smashing Pumpkins, and Massive Attack count among the many who chose to embrace the “anti-realism” of the machine to create their seminal works. Countless experimental, forward-thinking, or otherwise off-center electronic genres and classic tracks owe much to the sound of the 606.

+ From the archives: Need quick and cheap track mastering? Read our Entrepreneurship in Music interview and find out whether online mastering tool Landr is right for you!

Check out some beats made with the 606:

Between the legendary recordings created with all of the TR-series rhythm composers, and the influence on countless genres and generations of music and music-makers, Roland has left an indelible mark on the history of recorded music that we will never forget.

In fact, the hype has returned to Roland’s classic Rhythm Composers with such a fury, that they’ve just released a series of compact reissue/updates at an extremely agreeable price point: the new TR-09 retailing at $399, and the TB-03 at $349. They’ve already received glowing reviews from many reputable outlets, and bring the world of Roland music-makers to a new generation of artists.

For more on the history of the TR series, we highly recommend this piece by the Independent Movement.

And if you’re interested in making your own beats but don’t yet have all this gear, check out our free intro to beat making course taught by Ableto Certified Trainer, Dan Freeman.