+ This lesson is excerpted from Soundfly’s Faders Up: Advanced Mix Techniques course. To access this, plus hundreds more videos and tutorials on production, songwriting, composing, beat making, and mixing, subscribe here.

Let’s start at the beginning. What is mastering?

If you think mastering is the phase of the record making where songs get made “louder,” you wouldn’t necessarily be correct. Yes, sometimes loudness is a part of it, but that’s not exactly why you should look into getting your music mastered.

In fact, here’s a video in which Grammy-nominated engineer Joe Lambert talks about how loudness can often be deceiving, when prepping a mix for the mastering phase, courtesy of Soundfly’s Faders Up: Modern Mix Techniques course.

The fundamental purpose of mastering is to make the mixes you’ve spent tons of time on sound as good as possible. Mastering prepares your mix for the media format on which your listeners will ultimately hear it. The following post will not make you a mastering engineer overnight, but this should help you get a better understanding of how to approach finalizing your mixes and ultimately start experimenting with mastering your own tracks.

The fact is that different formats have different limitations. CDs, DVDs, MP3s, streaming, and vinyl records all have various technical limitations.

If you tried to use a master that was created for CD format to make a vinyl record, you’d wind up with a record that would have 20dB more of 20Hz, 20dB less of 20kHz when it was played back on a consumer record player, and grooves that would run into each other.

Balancing the technical limitations of any given format, and the aesthetic desires of the artists, mixers, and everyone else involved in the music-making process is what makes mastering an extremely crucial part of the record-making process; as well as an art form unto itself.

If you want to find out more about the mastering process in general and how to master for vinyl specifically, we’ve got you covered! Check out the following articles on Flypaper:

For now, let’s move on to talk specifically about how to start utilizing EQ in your self-mastering pursuits.

Getting Started With EQ in Mastering

First of all, making a rough master of one song is different from mastering a collection of tracks. Unless you’re a machine, when you mix a whole record, you’re just not going to end up with eight to ten mixes that are equally as bright, wide, and loud. Making little adjustments to each song on the record so that they sound and feel similar, and flow well together, is a big part of the mastering process.

Simultaneously, mastering is not going to fix issues or make a single mix “better” necessarily. Mastering is where a bunch of tiny tweaks happen — not major surgery.

When you use your favorite analog hardware EQ or digital EQ emulations, you’re using what’s called a minimum phase EQ. When you boost or cut a band on this type of equalizer, the change in amplitude of that particular band creates a tiny amount of delay in contrast to the other bands. This little amount of delay isn’t a “bad” thing.

In fact, it’s part of what makes classic analog EQs so desirable for the way they color the sound. 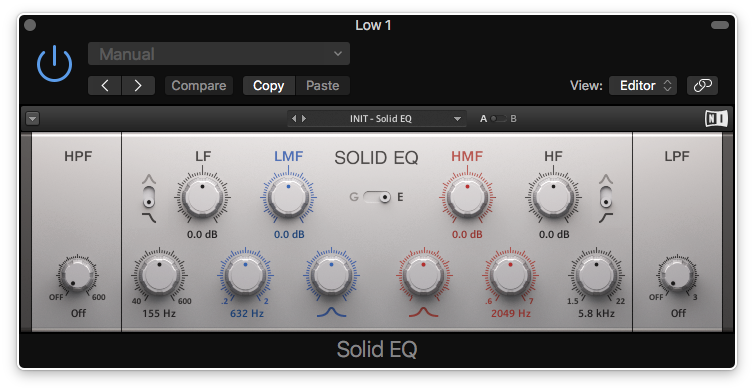 Based on the classic SSL E series EQ, Solid EQ from Native Instruments is an example of a minimum phase EQ and tries to recreate the famous musical sound of the original.

Linear phase EQs allow you to create more transparent-sounding EQ changes by analyzing the amount of delay created by one or all of the bands. They then look for the most significant amount of delay produced and delay all the bands by the same amount.

If every band is delayed by the same amount, that means every band is 100% in phase with one another, and prevents the coloration that normally occurs in minimum phase EQs!

Though it looks identical to its minimum-phase cousin (Channel EQ), Logic’s built-in Linear Phase EQ is a potent mastering EQ that isn’t as CPU intensive as some others.

Those calculations, and the resulting delay for all the bands of the EQ, create a more substantial load for your CPU and an amount of latency that isn’t suitable for recording. It is, however, perfect for making subtle changes to a master.

Now let’s look at how to use a linear phase EQ.

Load up a linear phase EQ on your mix bus, and A/B with your reference. It’s essential to listen critically, at a consistent level, and make tiny changes. You’re in a unique situation as the mixer, where if a hi-hat is too bright or loud, you can adjust it.

When comparing with your reference, if your whole mix is a little dark, grab the high shelf of your linear phase eq and boost the top of your mix by a dB or two and check it out. Keep in mind; your master EQ choices affect EVERYTHING in your mix. If you boost the high-end to bring out the shimmer of the cymbals, you might make the vocal too sibilant.

When it comes to bass decisions, put on a good set of headphones. Unless you have an incredible room and speakers, it’s going to be difficult to analyze what’s happening accurately. A/B and make sure the low end is similar to your reference. If the bass and kick aren’t working together, you’re probably not going to fix that with mastering EQ. Make some mix changes. If the low end is a little boomy around 125 Hz, cut with your linear phase EQ. Again, just like with the high shelf, you have to be careful. Pulling down 125 Hz may draw too much body out of the vocal.

You’ve spent a lot of time on your mix, so double-check any EQ decisions that you make. Don’t hesitate to try things out and lean on your reference for guidance.

When in doubt, leave it. Sometimes, it just sounds as good as it’s going to sound!

Ready to Learn More About Mixing?

Head over to Faders Up: Advanced Mix Techniques (and Faders Up: Modern Mix Techniques) now and sign up to get hundreds more lessons on mixing and engineering. With Soundfly’s all-access subscription, you’ll be able to go through every course on the site at your own pace.