Every day, the metal gates are rolled up, the padlocks are unlocked, and the side-alley doors are swung open for business. The master power switches are flipped on, the tubes warm to a nice sizzle, and, one by one, each tool and instrument buzzes to life. From wide, wooden live rooms, to dark, dank project spaces, the recording studio is where an engineer continually mediates the largest macro sounds of a band playing in a room with the smallest micro-nuances of every guitar string, every ghost note from the snare drum, and every breath of the vocalist.

In studios around the world, one tool rises aboveas the central, essential component of this process just after the instruments themselves and the players who perform on them — the microphones. And in almost every professional studio, we rely on roughly the same cast of characters to deliver these moving, emotional performances. Let’s take a look at 13 of the most usual suspects and learn a bit about why engineers from the most modest to the most advanced studios rely so heavily on these microphone mainstays in particular.

But first, here’s a little Definitions Guide to get you started.

Dynamic range — The amount of headroom, measured in dB, between the noise floor of a microphone and its accompanying electronics, and its maximum recording level.

Dynamic microphone — A microphone made to withstand high sound pressure levels and dynamic ranges of sounds. Good for lots of different applications.

Diaphragm — The part of the microphone that a sound in air vibrates to create the electrical current flowing through the microphone.

For a bit more depth and to learn how microphones actually work, I strongly recommend reading Brad Allen Williams’ article “Turning Sound into Electricity: An Advanced Guide to Microphone Technology.” There isn’t a tiny closet DIY studio, basement-den-or-laundromat-turned-venue, or local one-table coffee shop anywhere in the Western world that doesn’t have at least one Shure SM57 as a part of its mic closet (or as its entire collection). This dynamic mic sets the standard for all sounds transient and can handle just about any sound source put in front of it. Its most common and trusty uses include:

Opinions vary widely (as they do for many microphone choices), but you can almost always rely on a clean, full-responsive pickup from the SM57, especially when pointed right at or near the center of a guitar amplifier’s speaker cone. Have your guitar player strum or pluck along and (while wearing headphones) move the 57 around until you hit the “sweet spot” of warmth and clarity. Get as close to the cab as you can for maximum clarity.

The SM57 is a classic choice for micing the top of a snare drum. It’s a great dynamic receptor and captures the “crack” of the top of the drum perfectly. I recommend placing the head of the mic just inside of the rim of the snare, one-to-two inches above the drum, pointed right at the center of the drum. Again, there’s room to move it around to taste with a pair of headphones on, especially if your drummer is rocking a ton of ghost notes or rim shots that you’re trying to capture in a special way.

Vocals, Brass, and Other Dynamic Sounds

At the end of the long, grueling studio day, if all you have is a collection of SM57s, you’ll have no problem making a record. As an alternative vocal mic to a condenser, you’ll still be in good hands with any decent performance, while these high-SPL microphones can handle a gamut of sources, from the brute of brass to the gentle intricacies of acoustic guitars.

Pro Tip — The cartridges of the SM57 and SM58 (the most common vocal mic around — it’s what the microphone emoji 🎤 is based on) are actually the same on the inside. The only real difference is in the grille — the round ball grille of the 58 acts as a natural pop filter and eases some proximity effect (the buildup of low frequencies from setting the mic too close to a vocal source), while the 57 allows for maximum proximity to the source, and therefore slightly greater clarity in the high end.

Here, in my recent survey of all my studio-head friends, I found a split about what can be expected at any studio you might walk into. The two most common responses were: The D112 is a classic, and it isn’t unreasonable to expect most professional-grade studios to have one, or something very similar, lying somewhere in their mic closet. Its large diaphragm and matching large grille give this mic a greater capacity for low-frequency response range and clarity, plus a nice bump around 4kHz gives this puppy a little extra beater punch clarity that just pokes right out in a mix.

The Shure Beta 52a You’re as likely to find a Shure Beta 52a on a stage as you are in a studio. It’s an affordable and durable workhorse mic focused on low end in much the same way that the D112 is, and as the kick-drum centerpiece of the Shure Drum Microphone Kit, you’re likely to find it in a plethora of studios. For a mic that’s likely to receive a beating over its lifetime, you can’t go wrong with the Beta 52a.

Each of these two common kick-drum mics is also a great choice as a dynamic microphone for your bass cabinets, low-tuned guitars, and any other low-end-emphasized application you might throw at it. (Sousaphone choir, anyone?)

Getting the Rest Covered 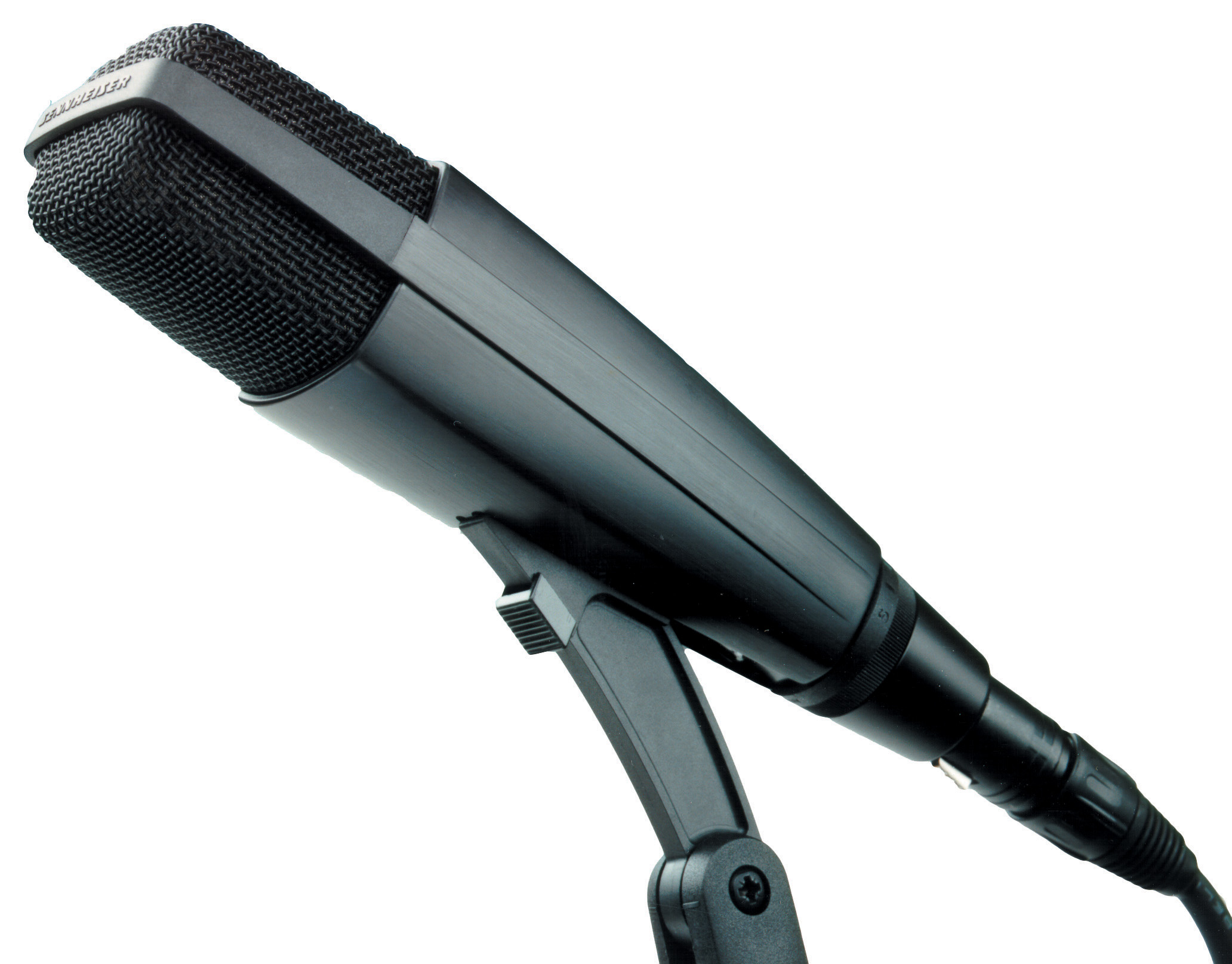 The 421 is another ubiquitous studio choice prized for its clarity and full-range spectrum that beautifully captures lows and low-mids. It’s a highly directional cardioid-pattern, dynamic microphone, so it’s no surprise that it’s an extremely common selection for toms, especially the floor tom(s). It’s also great as a broadcast mic for the same reason, or for getting all your buddies in a room together and just shouting some gang vocals at it. Let’s talk about Neumann for a second, because these microphones populate several selections off this list and are so integral to the history of microphone technology that they deserve a moment.

Georg Neumann’s successes in pioneering microphone and electrical technology range from inventing the world’s first mass-produced condenser microphone in the 1920s, to creating the world’s most prized vocal microphone, possibly to this day — the constantly imitated, never quite duplicated U47.

Throughout the ‘50s and ‘60s, the German company continued to innovate new and better technologies to keep up with the development of television studios as well as recorded music. After the fall of the Berlin Wall in 1989, Neumann went through a sort of renaissance of innovation, resulting in many new and highly respected microphones such as the TLM 103, the M149 tube mic, and our own KM184 microphone, which are all prevalent in high-end studios today.

Another highly directional microphone, the KM184 is most prized for its extremely even frequency response, plus a brilliance in the high frequencies for which many Neumann mics are known and coveted. These pencil condenser microphones can also handle a very high SPL, and therefore work very well in highly dynamic settings where clarity and brilliance of high end is essential — most notably on hi-hats and especially as paired stereo overhead microphones on a drum kit.

I Need More Vocals In My Vocals! As mentioned earlier, the Shure SM58 carries the same guts as the SM57, just housed in such a way to reduce proximity effect and onstage feedback and really to be completely destroyed and still function perfectly. You’ll more than likely find one or many of these in any given studio. The SM7B is coveted for its robust, yet glistening, vocal performance capture, especially regarding the spoken word. Its flat front-address, built-in pop filter, and internal isolation mechanisms provide an extremely clear signal with a strong, rich timbre. Because it’s fairly uncolored and “flat” in its response, it’s not everyone’s favorite. But if you like what you’re hearing acoustically in the room, you’ll probably like what you record with the SM7B. 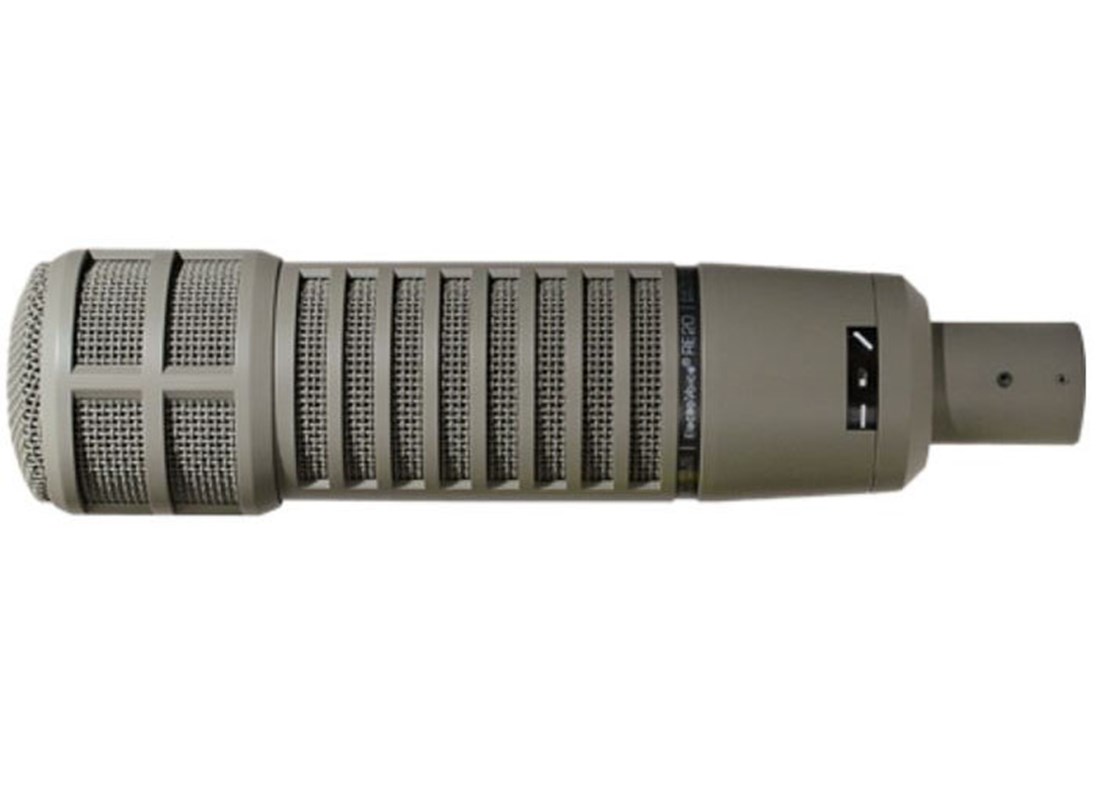 This is the classic radio-voice mic, best known for its extremely low proximity effect due to its open design. This is another great mic for deep tones — low voices, toms, bass cabs, kicks, and the like. But don’t stop there! Definitely see if it works for your vocalist in any vocal mic shootout.

The rest of our most common mic selections are microphones you can expect to find in many mid- or high-level professional studios but might not encounter in your average home studio or smaller pro-project studio. These are the cream of the crop and have been for decades in some cases, and so the pros continue to turn to them all these years later. These large-diaphragm condensers are a different kind of workhorse. For the utmost in clarity, precision, warmth, air, and all those pretty tropes that so many engineers can’t help but utter, the C414 is a massive mainstay character in the studio recording scene.

It’s good on just about everything, but what it’s truly great on is a bit more subjective and open to debate. Try it on vocals, try it on toms, and definitely try a matched pair on a baby grand piano. This one’s always going to “work,” so try to learn the color of it that you like on specific things! 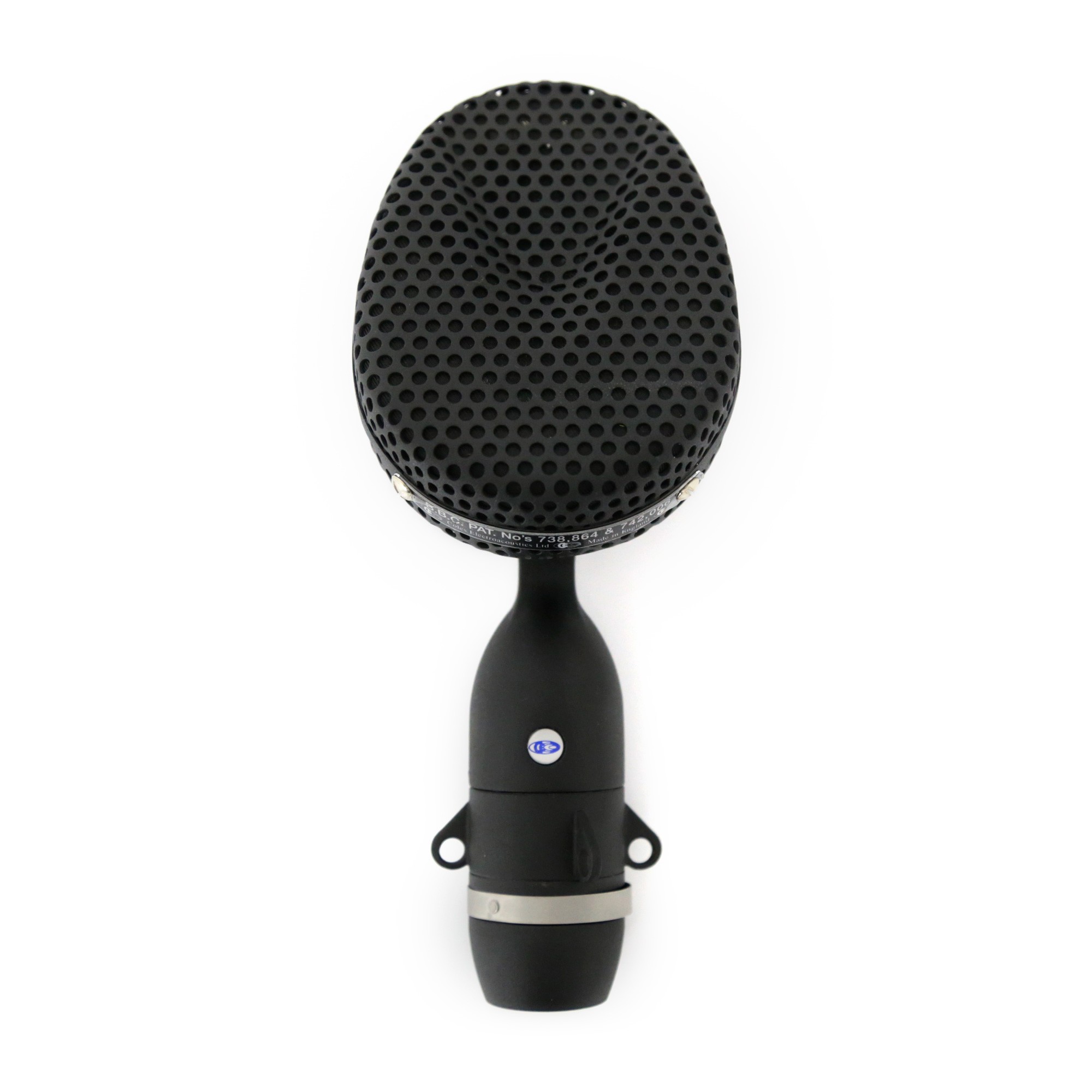 If you’re looking to add some “silk” or “milky, smooth tones” to a record or any sound on it, the laid-back ribbon of the bi-directional Coles 4038 may be for you. These are phenomenal for a darker drum overhead sound, in mono or in a stereo pair, especially in a jazz setting or any other more acoustic-instrument setting, or for that matter, an excellent room mic as well.

It also makes for a buttery vocal mic sound (check out the lead vocal in Sixpence None The Richer’s “There She Goes”). 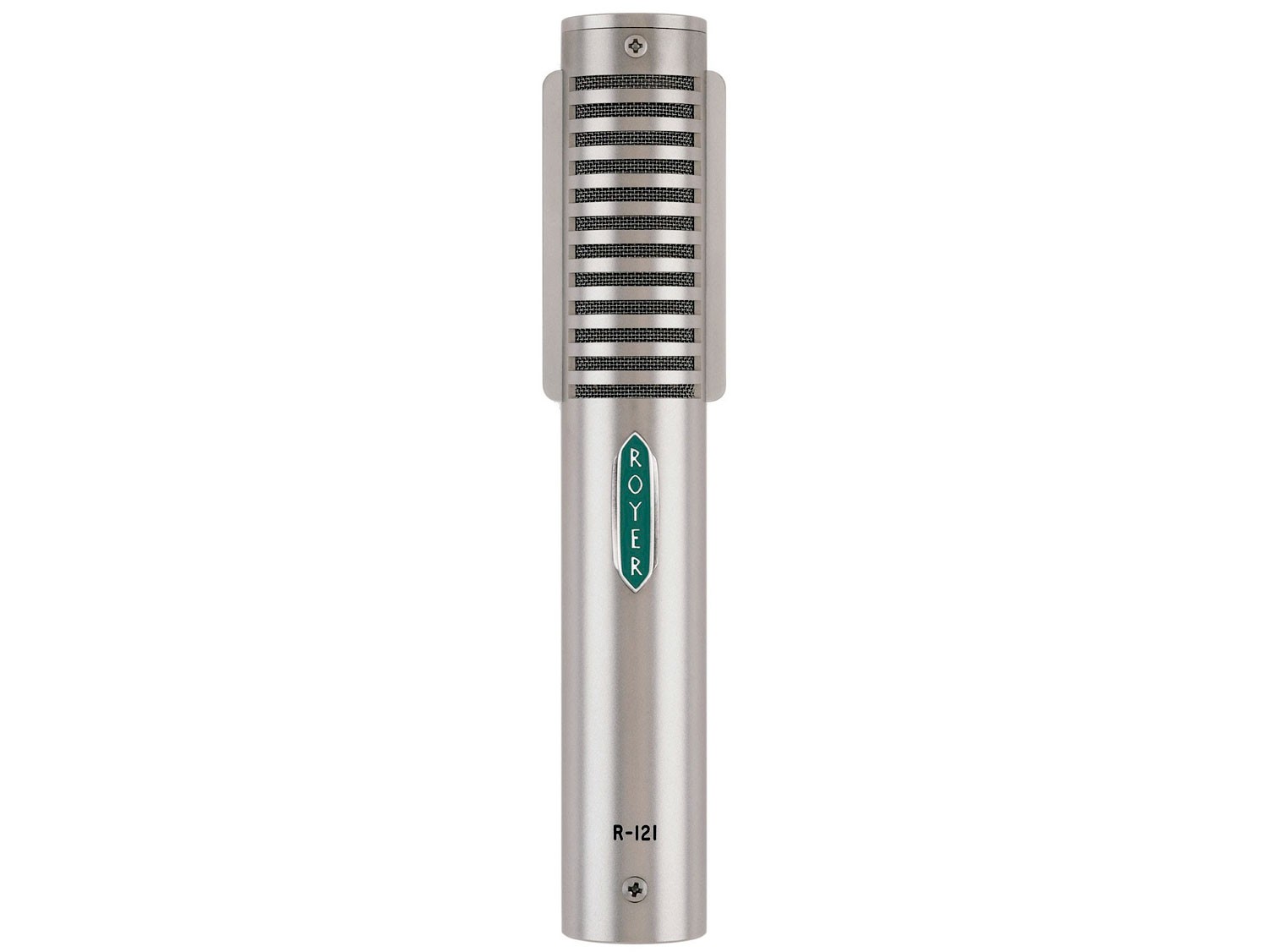 This bi-directional ribbon mic is constructed with super-strong magnets, allowing them to withstand higher sound pressure levels than one might otherwise expect of a ribbon. The warmth and clarity of this mic, combined with its sturdy design, make it great for grabbing highs and high-mids from guitars, brass, and cymbals.

These two mics represent the choice of vocal mic, when accessible, for most records and voiceovers you’ll hear in the mainstream today. As we discussed earlier, since Neumann himself and his team pioneered much of the technology contained within these beloved mics, it’s hard to deny their rightful place on the high throne of microphones.

The U87 is the mainstay vocal mic standard of clarity and precision for voiceover and modern record making, all across the spectrum, from pop, R&B, and hip-hop, to rock, country, and alternative of all sorts, nothing quite beats the U87. 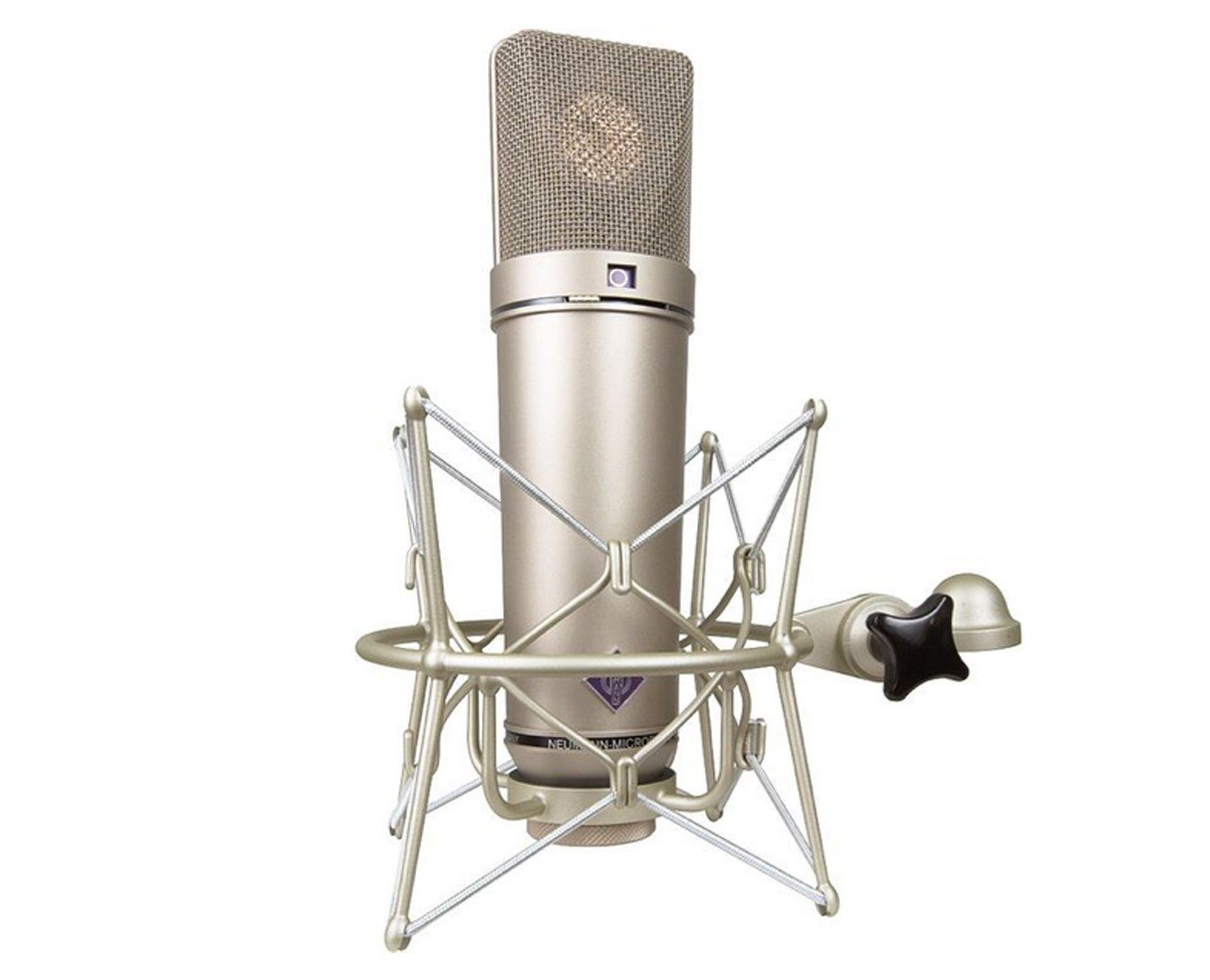 The U47 is the tube mic cousin of the U87 and provides a fullness and warmth that’s great for an aggressive vocalist to fill out. In turn, it sounds good on just about anything to which you’re looking to add warmth and/or depth.