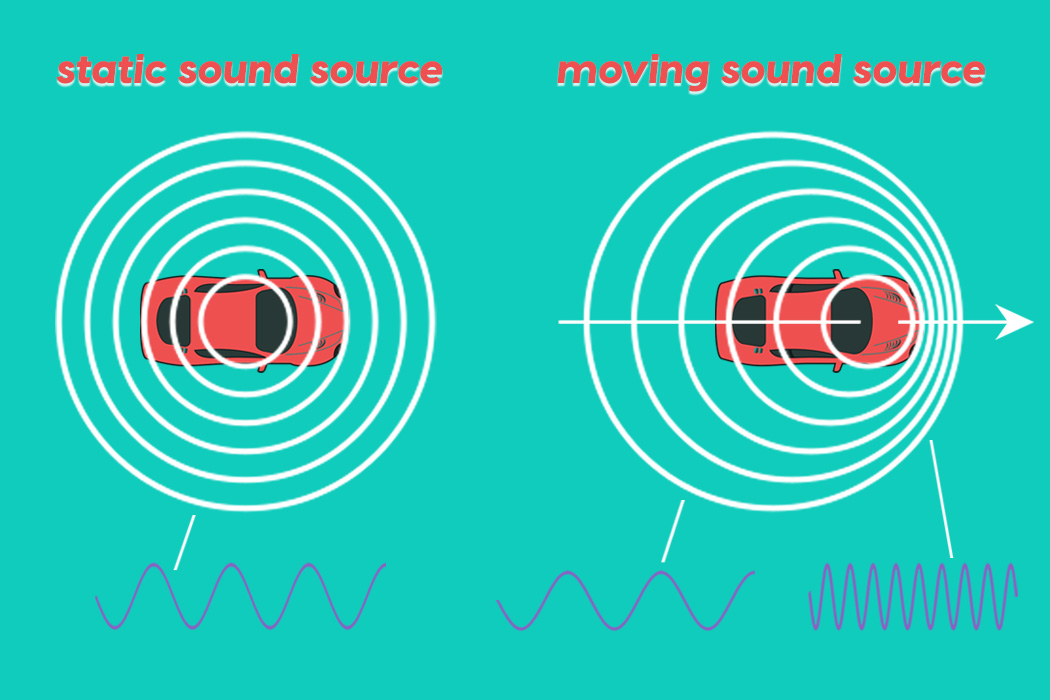 If a tree falls in the forest and there’s initially no one there to hear it — but someone, alerted to the event, suddenly runs toward the falling tree — what kind of sound does it make?

In this admittedly convoluted scenario, the tree — according to the moving observer — would make a sound somewhat higher in pitch than if the observer were standing still (or running away from the tree). The reason for this is a phenomenon known as the Doppler effect.

Most of us have experienced the Doppler effect in a familiar scenario: a car horn appears to drop in pitch as the honking vehicle passes. This occurs because the honking car is first moving toward you, and then — as it passes — away from you. To understand what causes this phenomenon, first picture a sine wave:

The distance between the peaks, or crests, is called the wavelength. By dividing the wave’s velocity by this wavelength, we can find the frequency — the amount of time it takes for one complete cycle of the wave to occur, crest to crest. With sound waves, the higher the frequency, the higher the pitch perceived by the listener.

Now with this in mind, picture a car, honking its horn, driving toward you. As the car moves, each successive crest of the wave is emitted from a position closer to you, creating the illusion (to the ear) that the wave crests are closer together. Since frequency is a function of wavelength, this has a direct impact on the perceived frequency, or pitch.

The inverse occurs once the car passes, and is driving away from you. As the source of the sound moves away, the wave crests are emitted from positions successively farther, which lengthens the effective wavelength, lowering the frequency and therefore the pitch.

Going for a spin: rotary speakers

In the 1930s, inventor Donald Leslie was disappointed with the sound of his new Hammond organ when he compared it to the pipe organ installations in churches and theaters. Since traditional organ installations featured many pipes with sound emitting from all around the hall, Leslie experimented with rotating speakers to throw the Hammond’s sound in all directions.

Perhaps as an unintended side effect, the rotating speakers produced a chorus effect at slow speeds and a vibrato effect at high speeds. This pitch wiggle was a direct consequence of the Doppler effect, and it turned out that, despite the fact that it still didn’t imitate a pipe organ very well, Leslie liked the sound. His invention caught on, and he had a very successful business selling his rotary speakers as an add-on device for organs of many makes and models.

The effect was so popular that many other classic devices (from the Shin-Ei Univibe to the Boss CE-1) were invented with the specific objective of achieving a similar effect in a smaller package.

Watch out for those ceiling fans

If you’ve ever sung or played an instrument underneath a ceiling fan, you may have noticed that the fan makes tuning difficult. This is also the Doppler effect at work. As sound reflects off of the moving fan blades, its pitch is altered, creating chorusing or beating effects against the sound coming directly from the voice or instrument.

The Doppler effect in music

Some composers and performers have attempted to include this sonic effect in their music. One notable example occurs in Kraftwerk’s 22-minute synthesizer odyssey, “Autobahn.” At 3:17, you can hear the Doppler effect recreated by a keyboard to mimic passing cars. A similar effect is used in “Trans-Europe Express” (listen here at the 25:01 mark for the effect).

Of course, tons of artists like Jimi Hendrix, the Beatles, Queen, and Pink Floyd made use of the Leslie speaker’s signature chorus effect.

Although it is somewhat rare for the Doppler effect to become a factor in music performance or recording, it’s a fact of physics that does come up from time to time. Keep that in mind next time you decide it’s a good idea to sprint toward a microphone with a pair of orchestral crash cymbals!