If you’ve sung even a single note in a large concrete stairwell, you likely know how flattering and interesting reverberation can be. The desire to artificially add or manipulate the illusion of acoustic space in recording and producing music nearly goes back to the dawn of electronic recording. Over the decades, a wide range of reverb technologies, each with its own advantages and disadvantages, has been employed.

Despite continual innovation, older methods of achieving reverb never seem to become completely obsolete; even the most primitive technologies still have their adherents and applications. Let’s check out a few of these and discuss their individual characteristics. In the early 1930s, electric clock manufacturer Laurens Hammond was seeking other commercial applications for the synchronous electric motor in his timepieces. By 1934, he’d contrived the tonewheel sound generator, and the Hammond Organ was born!

Since the organ was marketed as a replacement for acoustic pipe organs (really, it was!), Hammond soon decided that he needed a means of simulating the acoustics in large churches. In 1939, he filed a patent for a spring-based mechanical reverb system, and Hammond’s basic design has been in wide use ever since. If you take a peek at the original reverb pan in a 1960s or 1970s Fender amplifier, for example, you’ll see Hammond’s name on the manufacturer sticker.

A spring reverb relies on lightly tensioned springs with transducers at either end. The driver transducer functions like a tiny speaker motor — except instead of a paper cone, it’s affixed to several springs. The pickup transducer at the other end registers their reverberations. When mated to appropriate amplifier stages, the resulting reverb can be blended in to taste.

Most spring reverbs are crude but characterful with a distinctive, “splashy” sound that will be familiar to fans of Dick Dale’s surf guitar.

Clearly, this sound is not a very realistic approximation of an acoustic space. However, some manufacturers (like AKG with the BX-20 and Bandive with the Great British Spring) later pushed the technology’s limits, achieving impressively natural and lush-sounding results. Arguably the most intuitive reverb technology, an echo chamber is an actual reverberant room that houses one or more loudspeakers and one or more microphones. The engineer sends signal to the speaker(s) and returns the output of the strategically placed microphone(s), which can then be blended to taste with the dry signal. Although the principle of operation couldn’t be simpler, designing a good-sounding chamber is a difficult undertaking.

After Bill Putnam ingeniously used a primitive version of the technique on the 1947 Harmonicats hit “Peg o’ My Heart,” the chamber gained popularity, becoming the dominant reverb technology well into the 1960s.

Producer Phil Spector favored the excellent echo chambers at the now-defunct Gold Star Studios in Hollywood. The signature sound of the Gold Star chambers can be heard on many of his recordings.

Other famous chambers include four still in operation at Capitol in Los Angeles and three still in use at EMI Abbey Road Studios in St. John’s Wood, London.

Each real chamber has unique characteristics. Keen reverb historians can even recognize the sound of some of the more famous ones by ear! 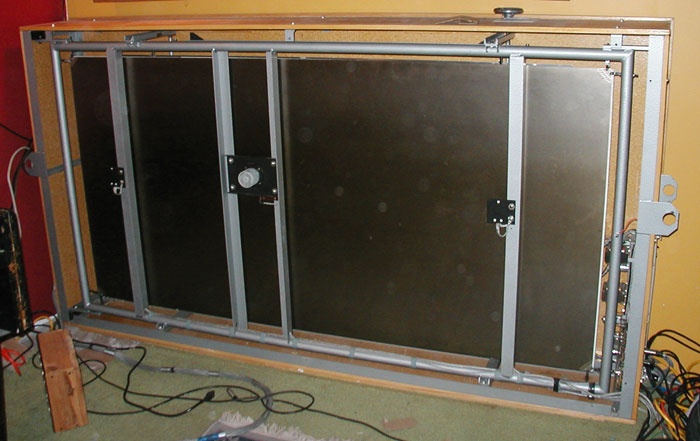 In 1957, German company Elektro-Mess-Technik (EMT) introduced the model 140 plate reverb. A little larger than a full-size mattress standing on its edge, the EMT 140’s mechanism consists of a large piece of sheet metal fitted with a driver transducer and one or more pickups. Conceptually, a plate reverb is not entirely unrelated to a spring reverb — a transducer drives a metallic object, and the resulting reverberations are picked up, amplified, and blended to taste.

Sonically, however, a plate produces a dense reverb effect that’s smoother and more diffuse than a spring; rather than a rapid series of discrete events, the subjective impression is one of a translucent, ambient cushion. While it may not sound exactly like a real room, it produces a pleasing reverb characteristic that’s surprisingly natural in a package much smaller than an echo chamber. A motorized damping panel, made of asbestos, and remote control allow the reverb time to be adjusted by ear to suit the program material.

Shortly after its introduction, the EMT 140 plate reverb became extremely popular and found its way into many better commercial studios around the world.

The plate reverb’s sound has become so woven into the fabric of recorded music that, despite considerable expense and size, it remains in wide use today. Although other manufacturers like Ecoplate have offered competing (usually less expensive) plates, the EMT 140 remains the standard and, by far, the most popular.

Not content to rest on their laurels, EMT introduced a digital delay line — the model 440 — in 1972. But their digital reverb technology didn’t really come into its own until the company released the model 250 four years later.

Lexicon introduced the competing 224 in 1978 to wider commercial acceptance. The EMT 250 and Lexicon 224 are still popular today and still represent (along with 1981’s AMS RMX16, 1986’s Lexicon 480L, and modern units like the Bricasti Model 7) some of the most sought-after hardware digital reverb devices.

Tasteful but ample use of Lexicon 224 is evident here, particularly on drums and percussion.

Digital reverbs utilize numerous digital delay lines to simulate the sound of a reverberant space. In an effort to make the sound more natural or complex, many digital reverbs incorporate modulation, filtering, and other trickery into the sauce.

The sheer flexibility of the digital reverb device is perhaps its biggest advantage. Digital reverbs can give the user precise control over pre-delay, diffusion, filtering, balance between early and late reflections, and numerous other parameters. Properly set, a good digital reverb can even produce somewhat-credible approximations of plates and chambers. A relatively recent technology, convolution reverb samples real acoustic environments and relies on raw computing power to recreate them in the virtual domain.

The basic premise of operation, simplified: an acoustic impulse (as close as possible to one digital sample in length — usually a spark, burst balloon, or starter’s pistol) is generated within a desirable acoustic space. The resulting reverberation is recorded with a stereo pair of high-quality measurement microphones, and this impulse response can then be convolved with (essentially, multiplied by) each incoming sample of audio signal in order to simulate the acoustics of the sampled environment.

In practice, the convolution process never works absolutely perfectly but can indeed yield good results. Applications are broad-based, but some of the more arcane impulse responses are especially useful in sound design. Convolution technology is also sometimes used to model amplifiers (the Kemper Profiling Amp is one example) and other outboard gear — including other reverb devices! But be warned: convolution technologies often struggle to adequately model artificial reverbs that rely on modulation (like a Lexicon 224) or other time-nonlinear behaviors.

As your experience with reverb grows, you’ll learn which technologies you tend to prefer in a given circumstance. Although some of the above devices are near-exclusive to professional studios, it’s useful for even the home recordist to be aware of the basic characteristics and operation principles for each type.

That’s only the first baby step, however. Using any reverb effectively requires skill, taste, and experience, and the best way to gain all three is to get in there, try things, and learn from some mistakes.